Opened in April 2019 with up and coming star chef Adam Evans at the helm. It has been an early hit in the land of great seafood from the Gulf of Mexico which says a lot about him considering all the great seafood restaurants in the South.

It’s much bigger inside than it looks from the outside and a reservation is recommended on weekend nights. While the space has high ceilings…..it used to be the Automatic Sprinkler Company…..and hence the name, his wife is a designer and did the space which is quite comfortable.

We were a party of 6 which allowed a broad tasting of the various options available and while they have a few land animals on the menu, we stuck with sea creatures. When in the South and near the Gulf one must try any form of Blue Crab claws. This offering came with mint and cilantro relish and a lime vinaigrette. Simply outstanding. Followed this with the smoked fish hushpuppies and the grilled oysters.

For mains I had the seared blackfin tuna…perfectly cooked rare. We also sampled the redfish on the half shell…grilled skin and scales on, duck fat poached amberjack, grilled pompano, and the crispy whole lane snapper. A word about the snapper…..you must get this dish if it’s on the menu! Even though it wasn’t my choice it gets the nod for the best of the bunch.

Wines for the night were a very nice Spanish Granache Rosé from the Basque region. Once again….you must try wines from this region if you see them on the menu….slight effervescence, low alcohol and wonderful flavors of red fruit. Our second choice was a very nice French Burgundy. The wine list has been chosen for the foods available and included nice new and old world options.

Believe it or not….we had dessert! I had to try the fudge brownie with chocolate malt ice cream with spiced caramel popcorn….delicious and paired with a Pedro Ximenez Sherry, it was perfect . Others tried the brown sugar cake, black sesame chiffon cake and the pavlova. They were all very good but my additional nod goes the brown sugar cake….bananas foster like and delicious. 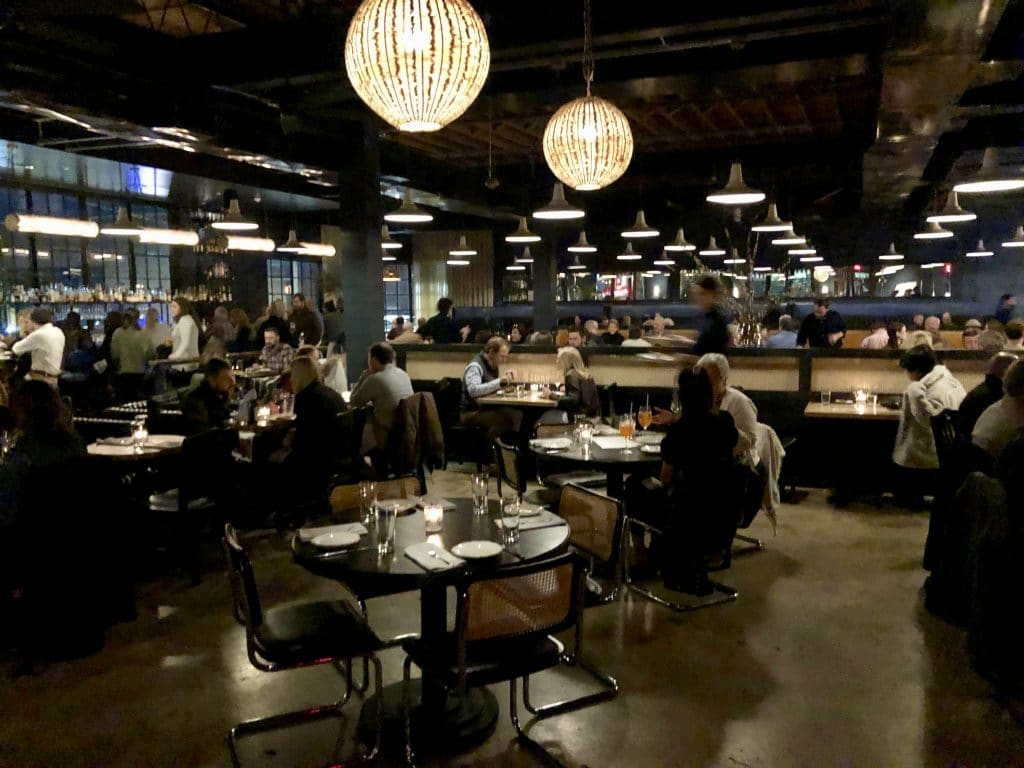 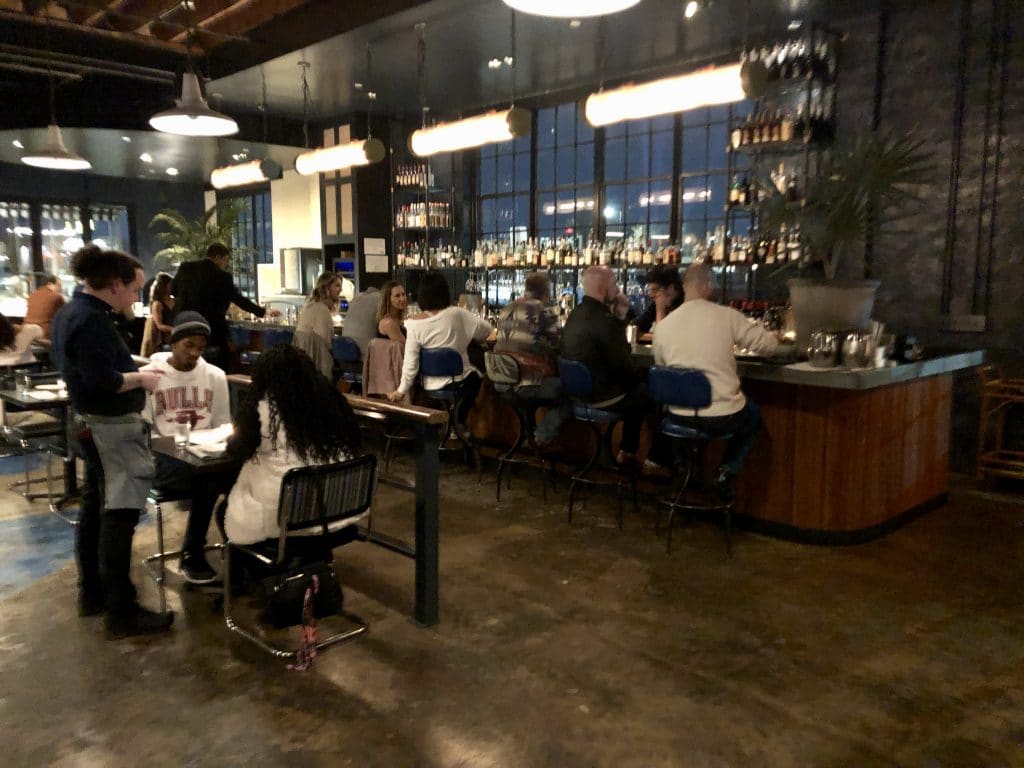 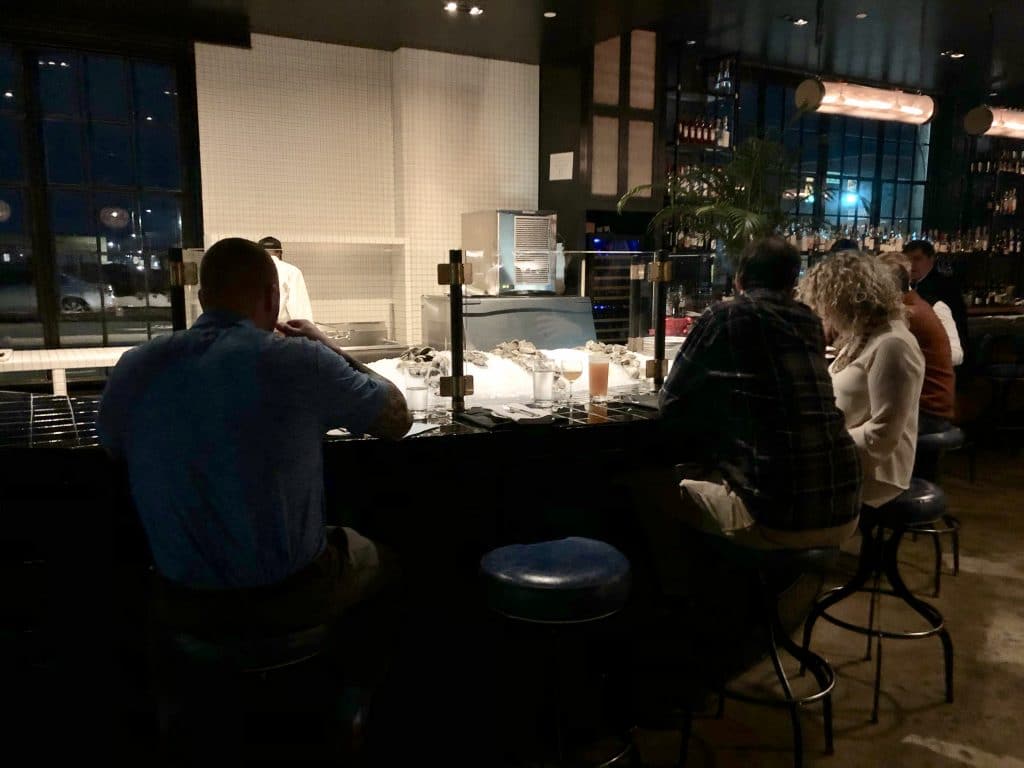 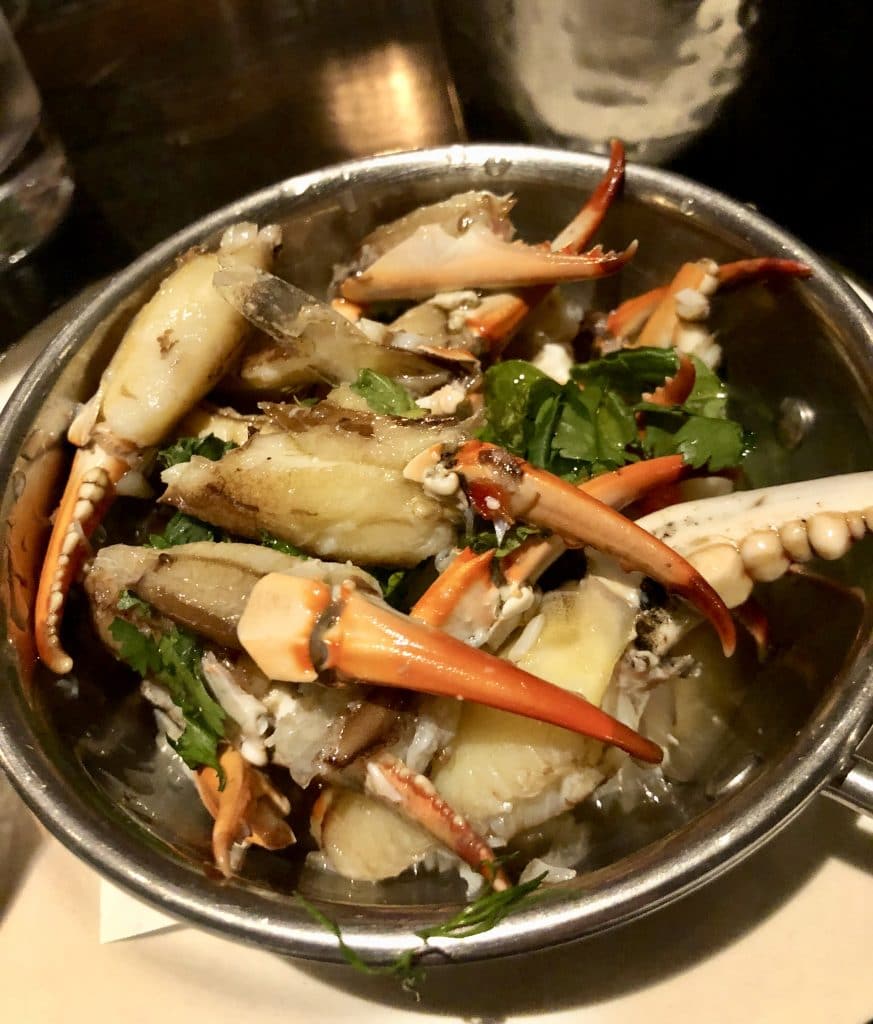 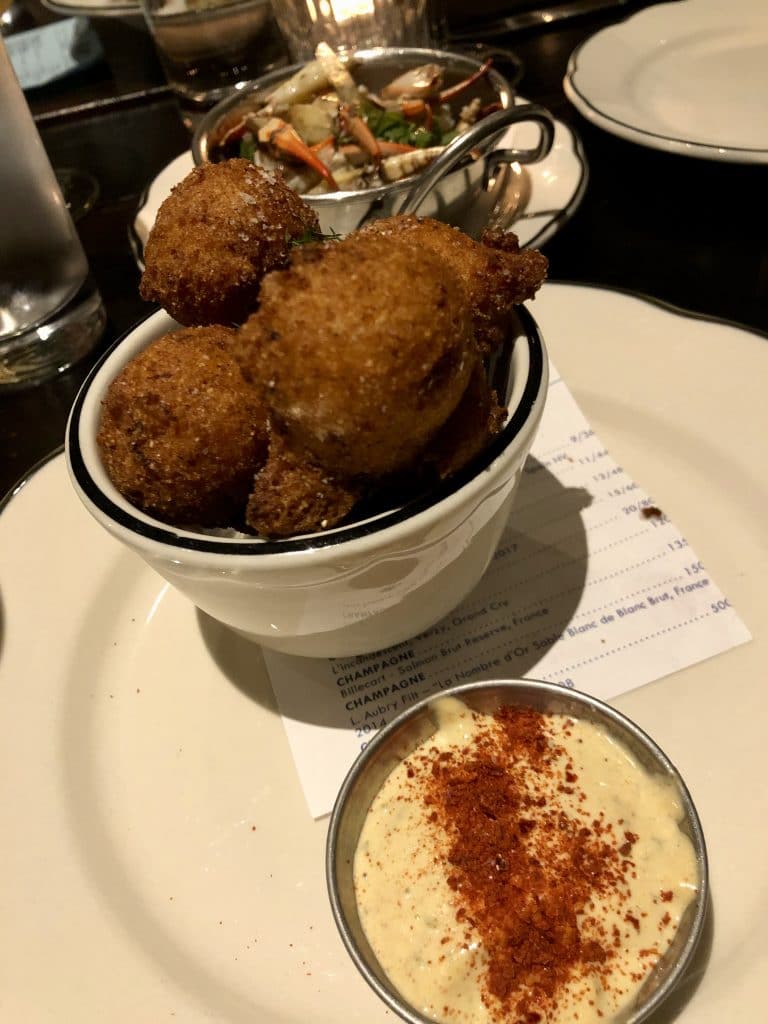 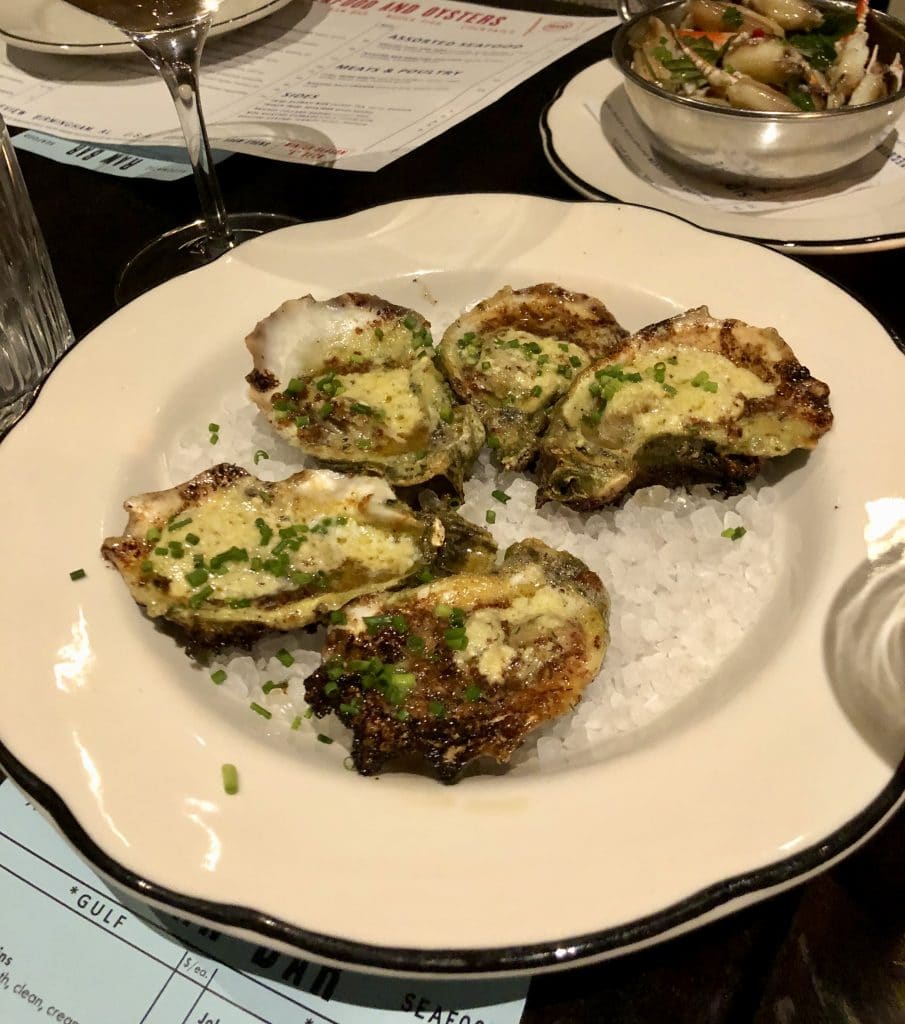 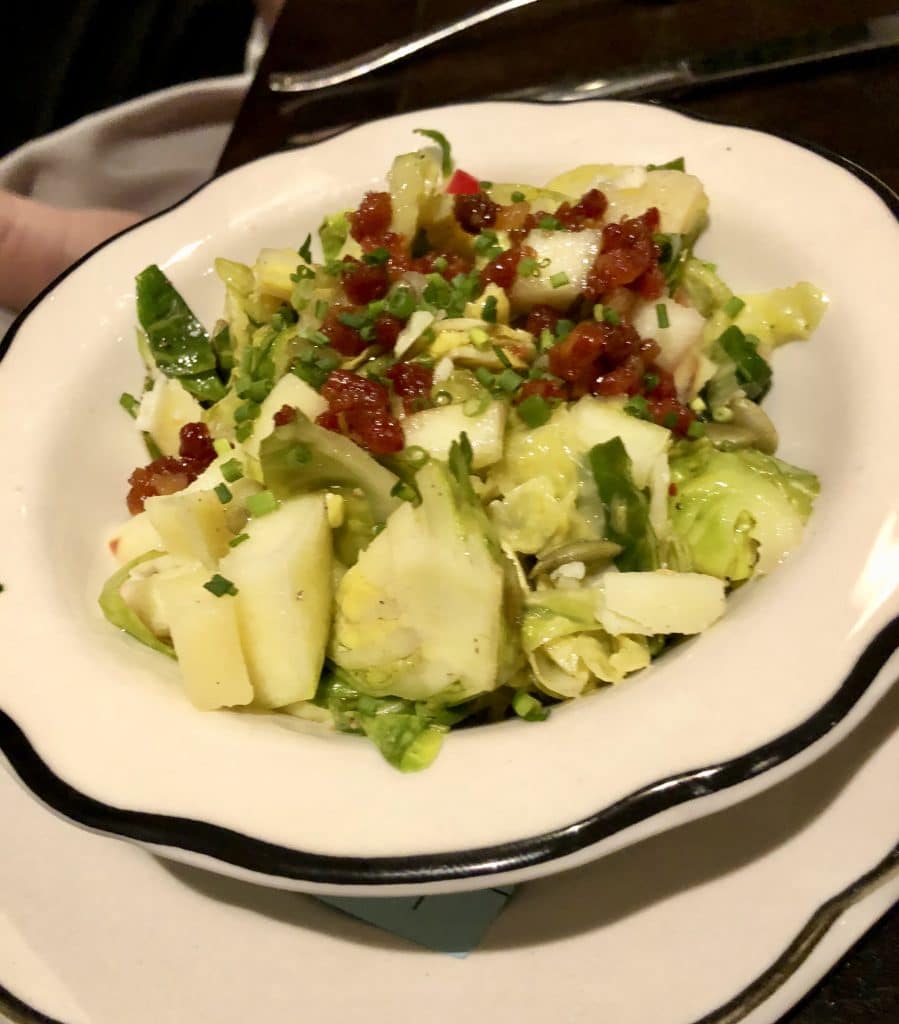 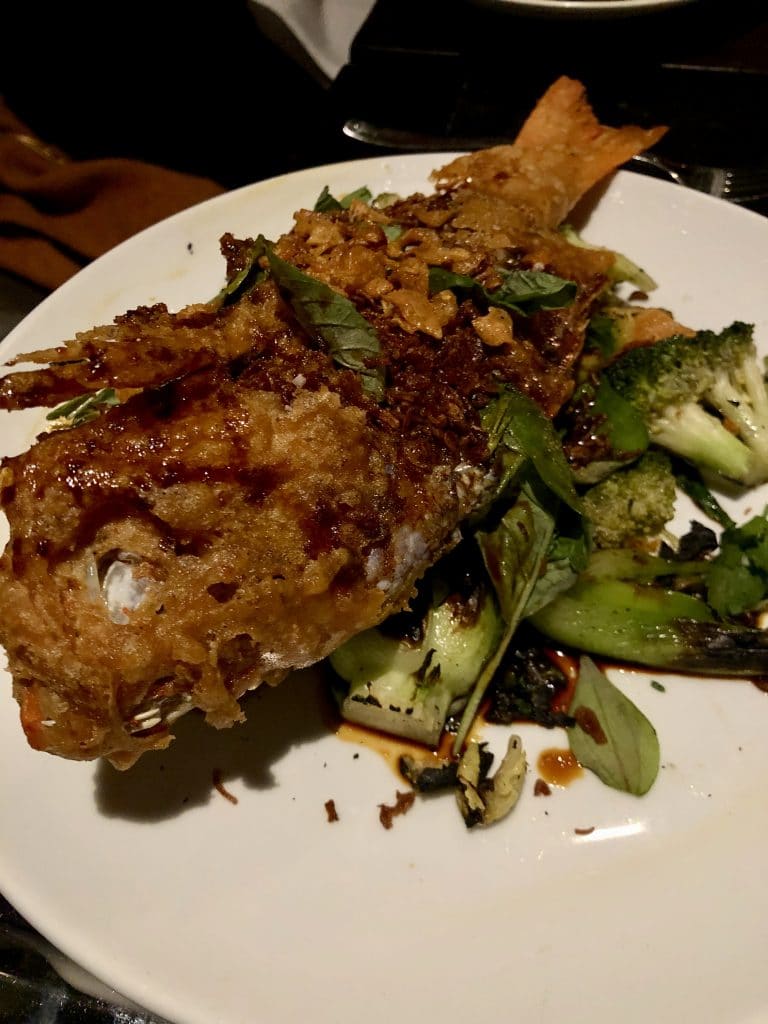 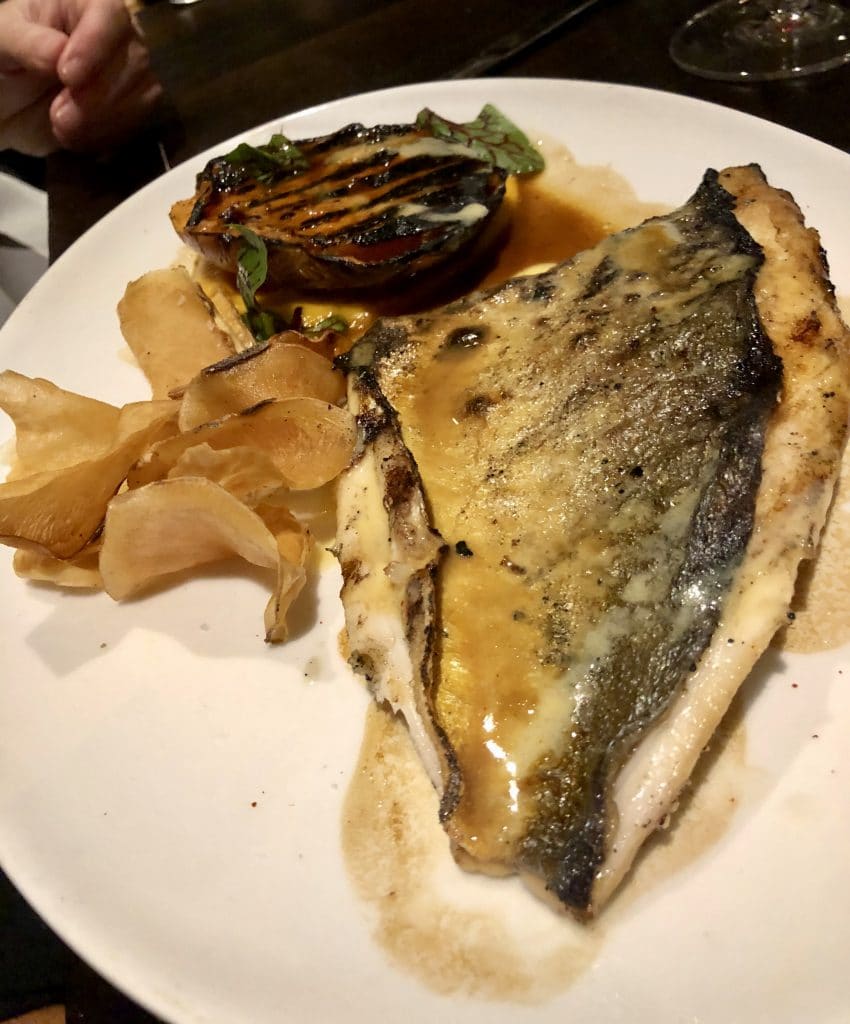 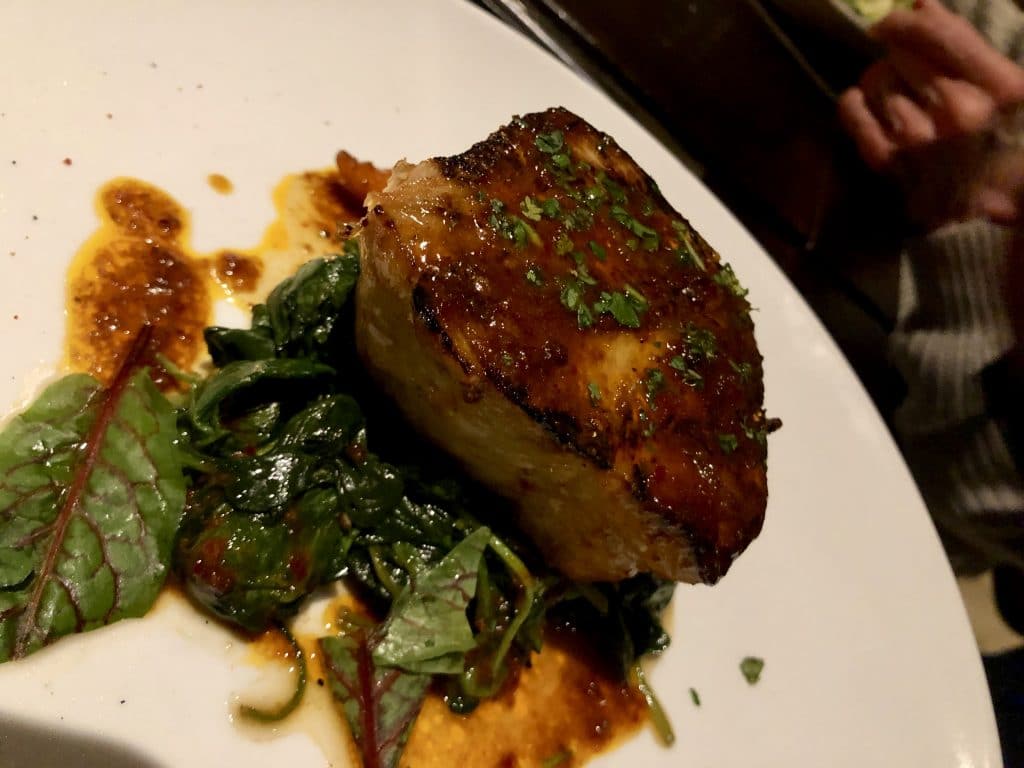 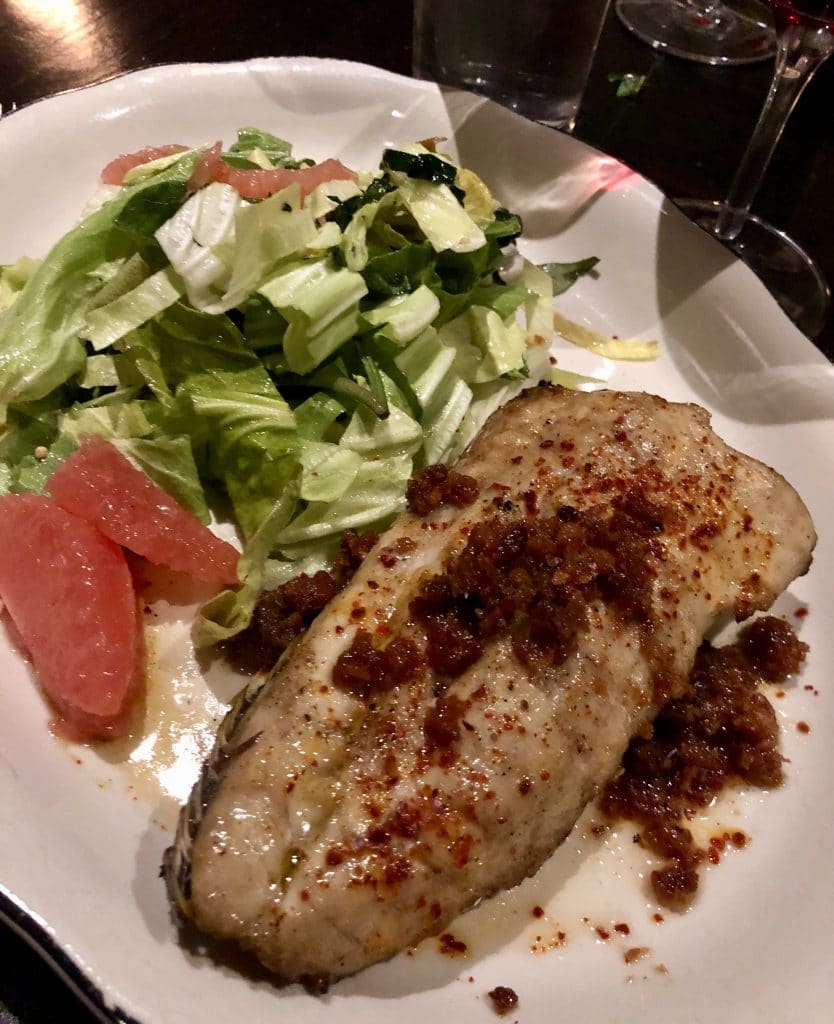 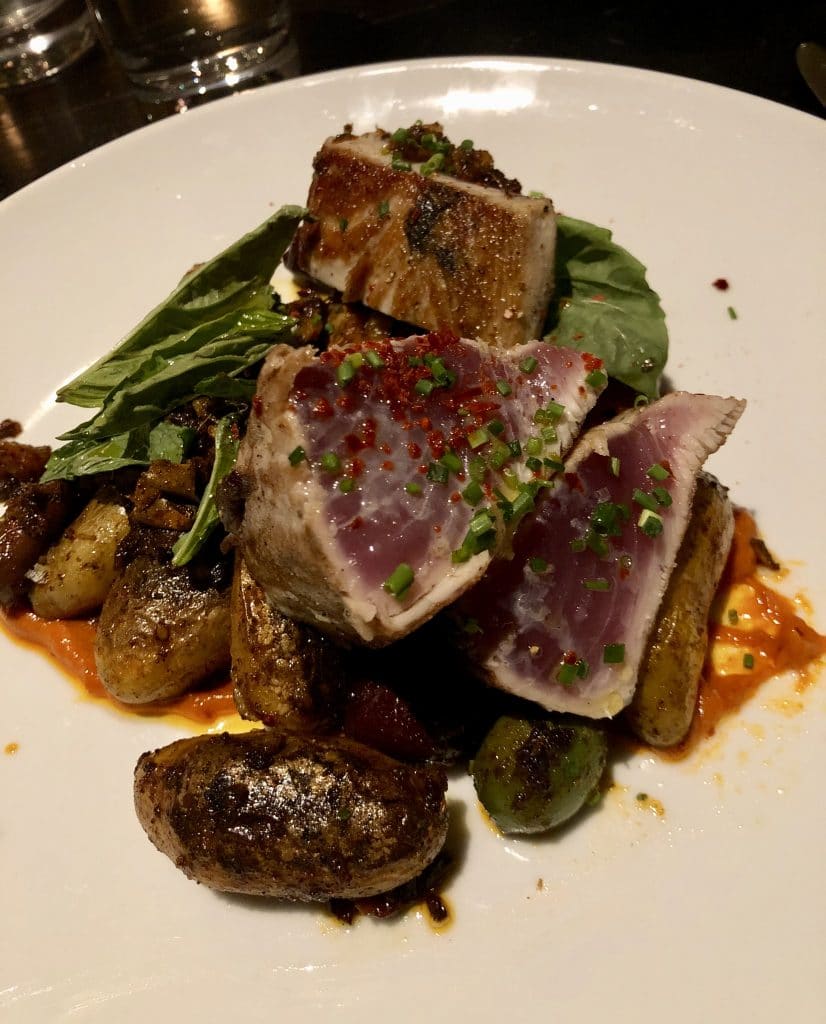 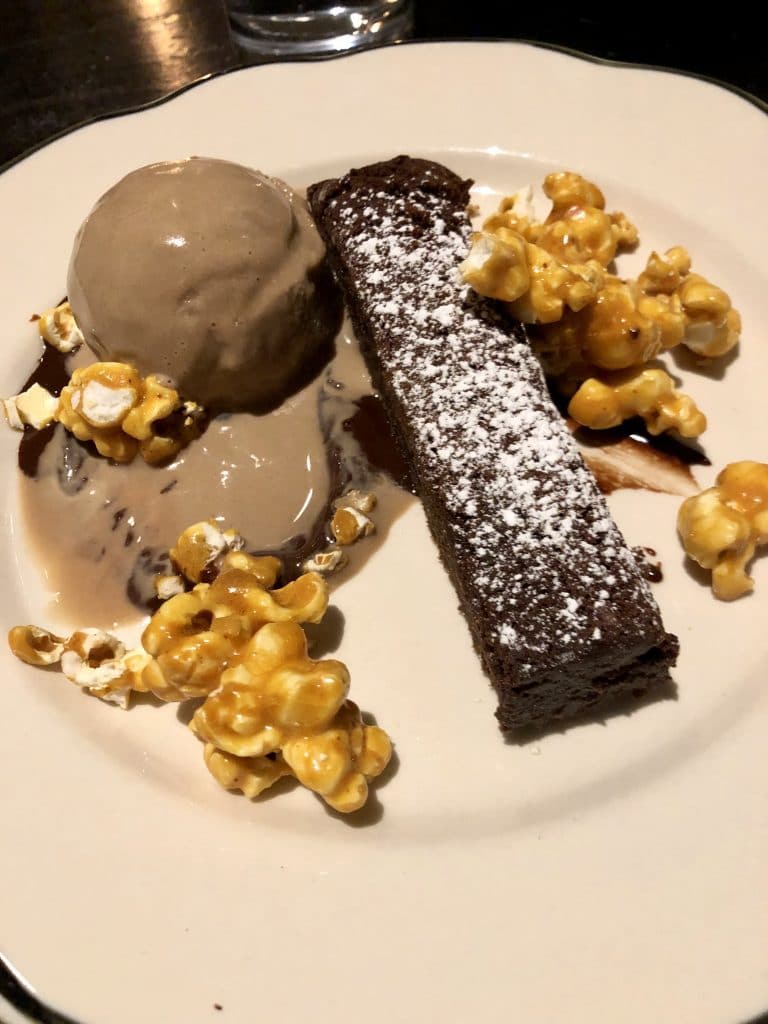 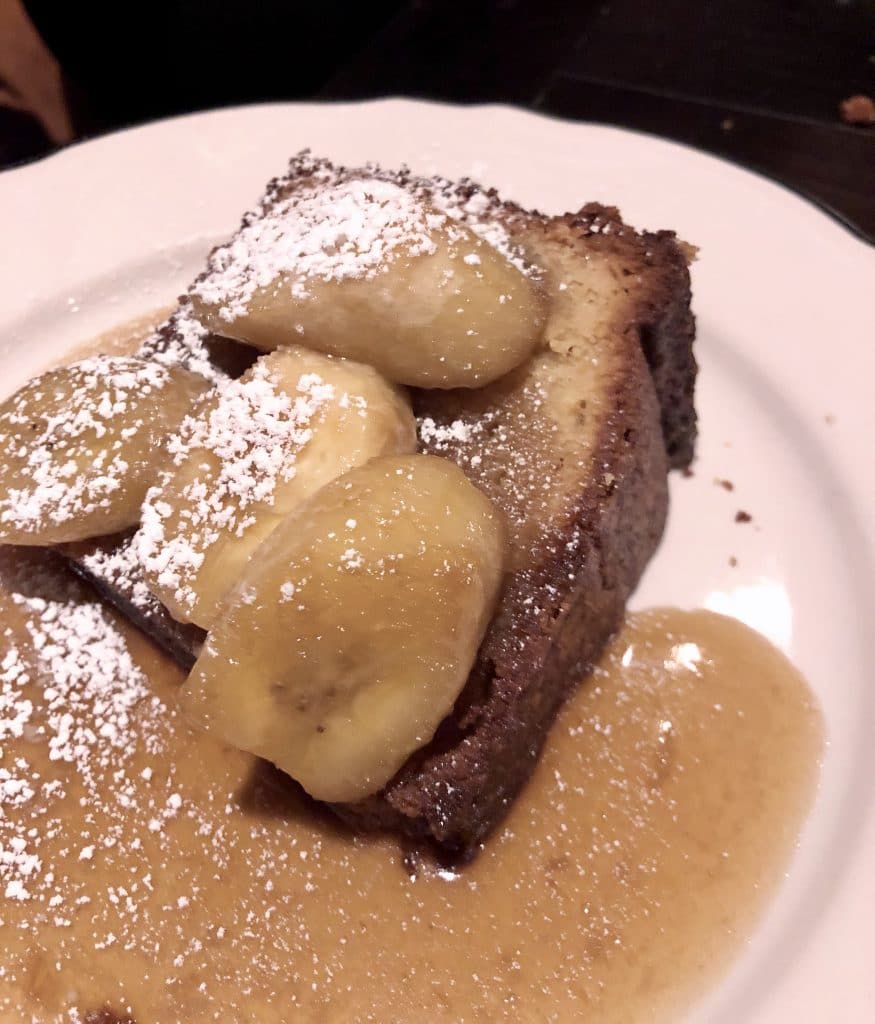 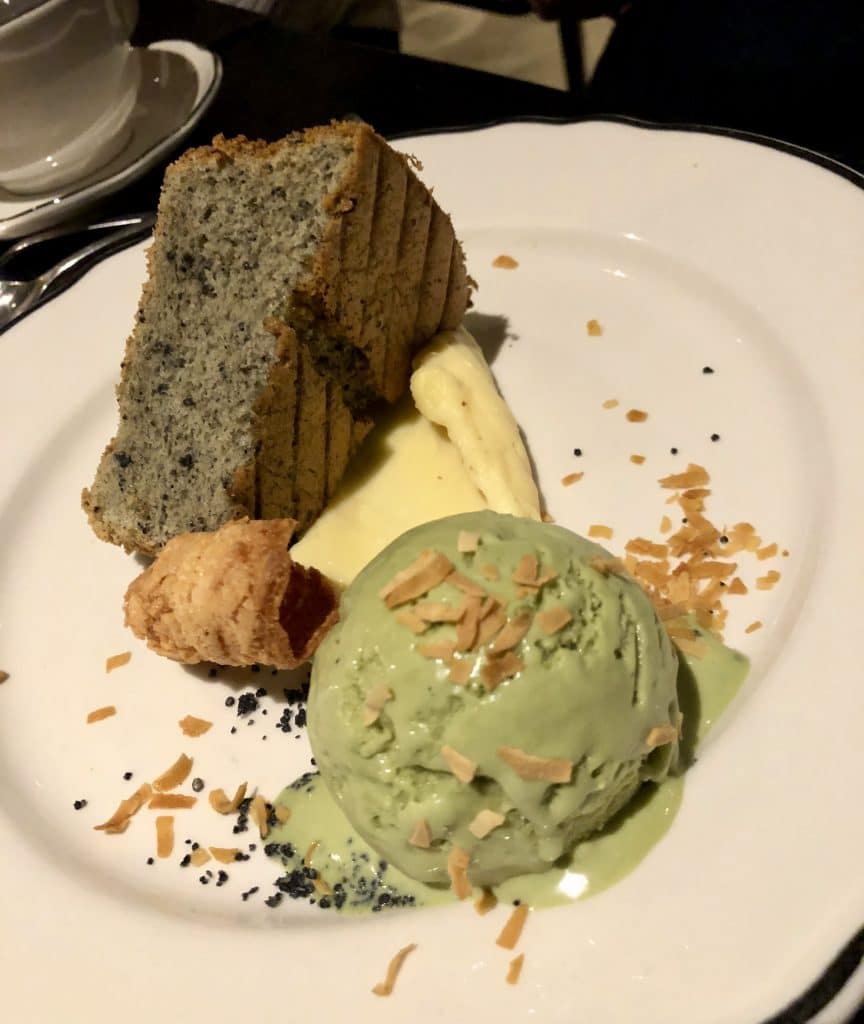 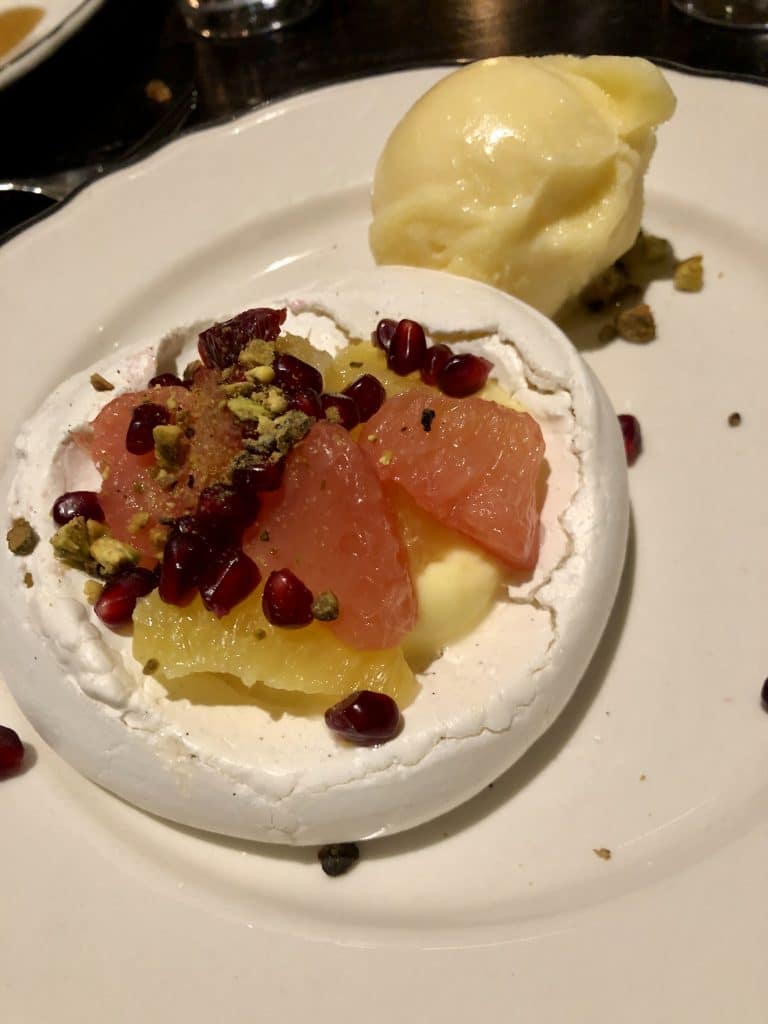